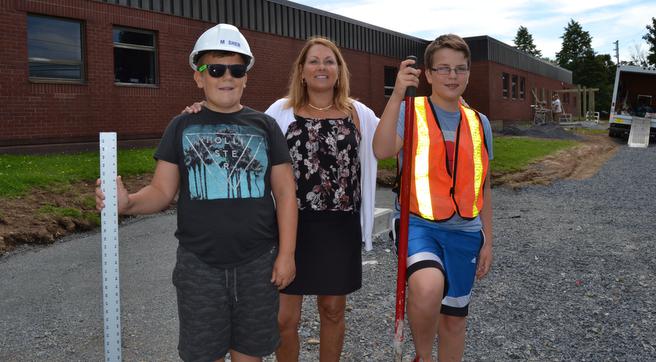 St. Agnes Jr. High has a lot of competition in its neighbourhood for being seen and appreciated by the community-at-large, what with the Mumford Bus Terminal, Walmart and the Halifax Shopping Centre being their immediate next-door neighbours.

“Because of where it is, sometimes it seems to get lost in the Halifax Shopping Centre,” says Liz Greene, chair of the St. Agnes PTA, and the mother of three boys in attendance at the school.

That’s all about to change, though, as St. Agnes partners with Halifax Regional Municipality to stamp out a more concrete, physical connection to the community, hoping to create a lasting legacy of community partnership for years to come.

“Initially the principal [Brad McGowan] contacted me and he wanted to come in and discuss how the school could integrate with the community,” says Linda Mosher, city councillor for Halifax West Armdale. “They’ve got a large area, but it was quite an unsightly property, and if you look around, it’s quite an industrial area … I know the principal wanted to improve the aesthetics of the school.”

Mosher pointed out a dilapidated bike rack on the premises, which is so grown-over as to be unfit for use, and a pair of bushes that provided potential hiding places for criminals to use, as examples of things at the school that needed a facelift.

“Whenever I came to school, I didn’t even notice it was there,” says Ryan Greene, Liz Greene’s middle son who will be entering Grade 8 this fall. “It was grown over, and mangled, and small, and no one ever used it, so I never even noticed. ”

But this project, dubbed the Legacy Project by the PTA, goes beyond mere practical and safety upgrades to the property. Mosher and the PTA came together with the residents in the area to design a space that won’t just serve to benefit the student body at St. Agnes, but the neighbourhood as a whole.

“I started talking to neighbours and students, and everyone pretty much had the same thought,” says Mosher, who says that the location of St. Agnes allowed for a unique chance to integrate school with community. “They want to integrate with the community with a real statement park and something that the community can use. They want to be connected physically, plus they want to make it safe.”

The Legacy Project, which will be mostly completed by the time students return in September, will feature not just a new bike rack, but also a new pedestrian walk-way that connects the school to the sidewalk, a concrete assembly area, a new flagpole, nine park benches, and a wooden arbor with vines — all for the enjoyment of the students and the local residents, who will hopefully be inspired to take a bit more personal ownership of the school in their midst.

“[Our goal is] to beautify it a bit, and make it more visible, and have people want to notice it and look after it as a community building,” says Greene. “I think, too, that the kids of St. Agnes will take pride in the area, so hopefully they will be willing to help with the upkeep of it.”

It’ll also prove a boon to incoming students, like Ryan’s younger brother Adam, who is just about to start the seventh grade this fall.

“Before, when I came here, it kind of seemed a little bit threatening,” says Ryan, who sees other benefits to the new park, such as a better place to study, and an alternative for kids to eat on-site in the park rather than going to the nearby McDonald’s every day. “But with all that stuff out there, it wouldn’t seem as threatening – it would just seem like a nice, calm place that connects with everything around it.”

“I’m actually pretty excited to go,” Adam agrees, who has been inspired by the school’s and the city’s example to be more community-minded himself. “I’d love to be part of a new and fresh Jr. High community.”

And the best part? This legacy is still being written. Thanks to smart tendering on the part of the city planner involved, Mosher says that the project is going to come up significantly under it’s $75,000 budget as is, so she and the PTA are interested in hearing about what more can be added to the Legacy Project to make it even better.

“Do we want public art? What else do we want to add to this? I think we’re going to have quite a bit more money to play with,” says Mosher, who’s eager to hear what students might have to add to the pool of ideas for St. Agnes’ beautification. “It’s not like the project is finished when it’s done.”

For students like Ryan, though, if this new park allows students like him to have a better connection with the community he goes to school in, then mission already accomplished.

You can throw in your two cents on the Legacy Project and potential future additions to it by contacting Linda Mosher directly, which can be done via lindamosher.ca.

Via The Halifax Citizen