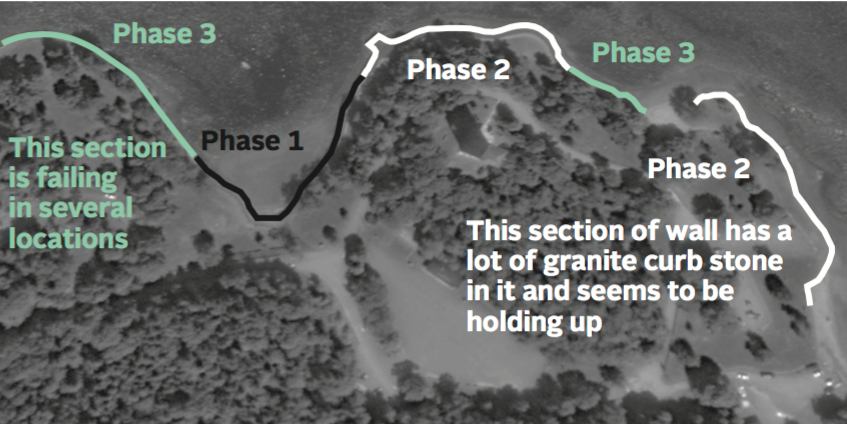 The seawall at Sir Sandford Fleming Park (Dingle) has been failing. It is over 60 years old and was built using traditional methods which did not take into account the rising sea levels. After severe storms such as Hurricane Juan, we hired a consultant to evaluate the damage to the walls and paths due to ooding, wave actions and sea-level rise. The distinct, quarried stone seawalls were evaluated to determine how to rebuild them to last for another 100 years. The study took into account storm waves, high water levels and anticipated future sea level rise and other climate changes. We also held a public meeting to present the various options the consultant provided to rebuild the wall. The vast majority of residents indicated their preference for rebuilding with natural granite versus an engineered wall. The natural granite walls are the most expensive option but re ect the historic integrity of this park.

Recently Council awarded phase 3A and 3B of the Northwest Arm seawall restoration to Lange’s Rock Farm Construction Limited.

They were the lowest bidder meeting tender speci cations and their bid came within 1.5% of our engineering estimates ($660,130.38). This company did Phase 2 of the project and they have extensive experience working with natural granite.

One section is 40 meters in length and is located left of the supervised beach area. The other section is 130 meters and is to the left of phase one, below the bandstand area. This section is failing in many spots and granite rocks are falling into the arm. The scope of the work includes construction of a granite rock seawall, asphalt walkway, drainage and associated reinstatement. Due to tidal zone and weather restrictions there is limited time to complete the project. It is anticipated phase 3A will be completed by September 15, 2015 and Phase 3B will start by April and be completed by the end of June 2015. Lange Farms is starting to bring in granite stone in and it will be stored in the lower parking lot to ensure it is on-site prior to the weight restrictions that are put on the roads.